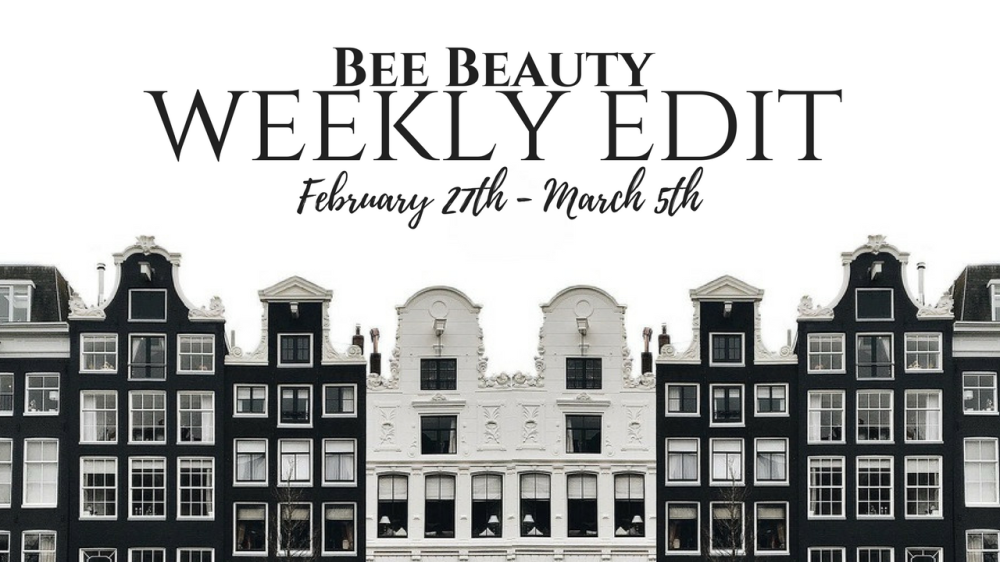 Good Evening/Morning, It’s Monday, well it was when I started writing… Anyway, Monday means I have my weekly roundup post. I was calling these “Last Week in Picture. Life + Makeup” but that was just too long so Monday posts have a new name, “Bee Beauty Weekly Edit”. What yall think? I should just change my posting schedule to Monday-ish, Wednesday-ish, and Friday-ish. My sleep cycle is backward right now.

Anyway, in this post, we talk Mardi Gras, knee injuries, retail therapy, nights out, loss, morals, ethics and what’s coming up this week on Bee Beauty. It’s gonna be a long one so grab some coffee and let’s jump in!

Last week was Mardi Gras here in Louisiana, the state pretty much just shuts down and parties for 4  days, the festivities start on Saturday, including parades, chicken runs, balls, all the plastic beads you can fit around your neck, and tons of cajun food and drinks. It’s all about overindulging before Lent begins.  This year, I didn’t have any big plans other than going to get coffee with my friend Lila and then meeting my husband at the bar for dinner and drinks, but I did want to do some fun Mardi Gras inspired makeup.

Lila got me this cool mask so I decided to do something to match it.So let’s kick off the MOTD’s from last week with Mardi Gras! 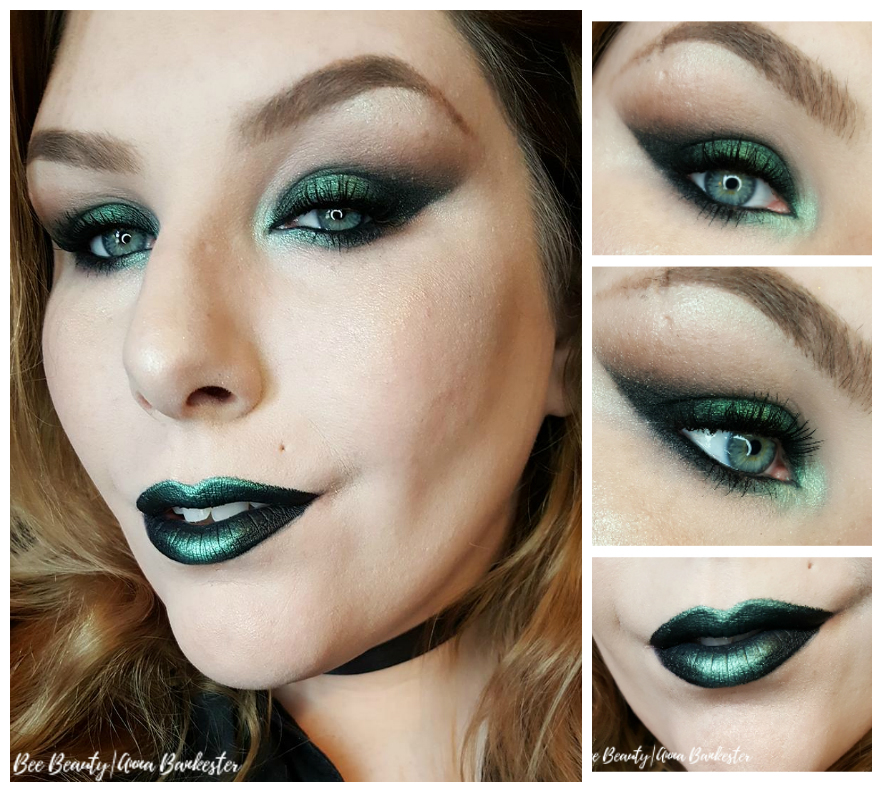 For real. Hurts like hell when you get smacked in the face by some plastic beads.

Had a lunch date with Ross and then coffee again. Those mochas were on point, and damn, cleavage on fleek.

Saturday, the girls (Lila and Brooke) and I went to the bar for Saturday Steak Night and Drinks, then into town to see a friend play at the Chalet, which is rumored to be the oldest bar in Central LA. I can believe it… We had a pretty damn good time, hough. The band was sounding great and pecan pie shots are sooo tasty. We should have taken more pics. I’m trying to remember to.

I also took hella notes on my makeup!

What is this, an OOTD?! Why yes it is. I suck so hard at taking mirror selfies.

OOTD Details: The tank top was a gift from my brother, from Cvlt Nation and designed by Norot. Jacket and crushed velvet leggings are from Target. Boots from Wal-Mart. Ignore the floor situation we are in the middle of changing out the floor in the bedroom and LOL at my hand! Crab People. I legit have crab hands but look at the dainty AF pinky.

When you love a filter so hard. Must put it on all the pictures!

Yeah, so I have pretty much spent this week in an allergy fog. Thanks, nature!

However, my anxiety has improved this past week but I freaking hurt my knee at the gym. I wasn’t even doing anything with my legs. I twisted it sitting down on a bench. Are you kidding me? Thanks, being 30. This knee has given me hell since I cracked it when I was 12. My dad is having knee replacement surgery, maybe they will cut us a family deal.

I took a couple pictures of the coffee shop on Mardi Gras. It was nice a quiet when we were there. The owner passed away the week before last so we went to pay out respects I guess. My brother and my friend Lila were very close to him. We’ll be going to the memorial this Saturday. I hung out with his daughter this past Saturday and she seemed in good spirits, such a sweet girl. Jeff (the owner) was a savior to Alexandria downtown which was a ghost town until he opened a coffee shop down there a little over 10 years ago I believe and now our downtown is thriving with an active art community, music, and culture. They should name the street after that man. My brother who lives in Medellin, Columbia couldn’t fly in for the Memorial so I am writing a letter on his behalf as well as getting a flower. Anyway, he was telling me so many sweet stories about Jeff and all the kind things he did for him and other. Lila had even more wonderful stories, some were so funny. This is a man the whole city will miss.

On Friday, my sister and I had “Treat yo self” day and did some retail therapy and a sushi date. She bought all the things! We hit Ulta, Sephora, JCP, Bath and Body Works and Hot Topic because we can’t not go there, nostalgia and all. We used to practically live there as teens. I even interviewed to work there!

While we were in Ulta I picked up a few things I will have in an upcoming Spring/Summer Haul but I have to show some things because I have been loving them so hard this week that I gotta talk about them for a minute.

The Tarteist line from Tarte is everything! I have been LOVING the Tartiest Pro Palette and the Tarteist Pro Glow. They are just so good.

For my manicure lash week, I was rocking Native War Paints in Cable Knit Sweater. Not very seasonal for this time of year but it’s so pretty.

I picked up the Kat Von D Lock-It Concealer in White. Best thing in the world for a pale gal. Where the hell was that when I was 17 and goth AF?! Seriously, that teenage goth girl in me us ugly crying with joy over it.

I also found my an amazing mascara combination, cause you know I gotta layer up. The Maybelline Colossal Big Shot ( I seriously almost type shit instead of shot every time!) then the Tarte Tarteist Lash Paint over top. So good.

Another pale girl dream is the Hourglass Ambient Lighting Powder in Ethereal. It’s magic in a compact!

Morals and Ethics and Fuckery

Now for something a little different. I want to talk about ethics, ethics in business pertaining to the Beauty Community.

I was approached by a “Beauty Blog” 6 months or so ago to do some beauty looks for them, videos and write reviews. It looked like an a Popsugar type of site. I did looks for them, fashion tips and the like for exposure and shared tweets which they started paying me to do, I thought that was odd to be paid for retweeting but I did it for a bit. Nothing really seems to off up until about a month ago. I was being asked to do odd things, like make fake accounts and leave comments, and reviews for a company who apparently ran the beauty sites which after some more research, I think is all a front to sell skincare. If you follow me on social media, you know exactly who I am talking about as you have seen my shares which are all removed. I’m paranoid as hell about all this so forgive me for being vague on company names. I want to have more information first. I’m a very paranoid person, let me repeat that. I am. I’ve mentioned my anxiety but haven’t gotten to the paranoia stuff.

I had found no issue in just creating the content at first but as time went on they quit asking me to do that, and just became about tweeting articles, they mentioned the skincare but they also has some nice tips, so I didn’t think much of it. Then, like I said, I was asked to create fake emails and leave comments on their content and on various YouTubers videos to peddle a skincare line I hadn’t even tried. On top of that, they tried to get me to handle payments for them. Needless to say, that was not what I signed up for. I just wanted to do fucking makeup, man. WTF! They can keep their dirty money!

Well, like I said. I started looking into things after that and it’s just sketchy AF. I don’t even know if this is a real company. Nothing feels legit. It all looks fine at a glance on the sites but the more you snoop, the shadier it looks. It made me sick to my stomach that I was doing anything involved with this so I quit.  I deleted all content from my twitter, Instagram, facebook, and Pinterest pertaining to them. The only thing I can’t get rid of is the beauty looks they tagged me in. I have blocked them on all platforms as well.

I just don’t want my name or reputation as a blogger or a human associated with such a bogus company. They are tricking bloggers, they duped me for a bit. Some of the things I read about what they have been doing are sickening to me. Paying for rave reviews, harassing bloggers and using so many fake accounts. I feel fucking dumb. The reps for the site act like your BFF, show all this interest in you and what you do. It’s all bullshit. They are manipulating you into doing their dirty work. I kind of think it’s all a front for something really sketchy. I even saw they were threatening bloggers for outting them.  I’m compiling some more info and I’m going to reach out to the bloggers I found who did out them and then I will be spilling some tea.

I casually brought up the subject of there being some bad feedback to the rep, she said she’d look into it and I haven’t heard shit back. I’m pretty sure they know I am on to them and done.

Just know, I cannot be bought into praising a product or lying about anything in a review. I’m a very straightforward person and will let you know if a product is shit, be it from PR or bought myself. I don’t BS or mince words. What good would that either of us?

I’m so angry right now at the ethics in marketing, not just in this case but as a whole in the Beauty Comm. Everything just feels like a lie right now and everything is #sponsered. It’s not a bad thing getting PR to review as long as it’s honest. I love working with Influenster, and Brandbacker, they encourage honesty! Lying isn’t doing anyone any good.  I’m just feeling very dishearten over all this and like an idiot. I feel like I was naive.

Okay. I’m done fussing. Let me know, have any of you had anything like this happen recently. Feel free to comment or email me if you’d prefer.  I hope you guys have a great week, thank you to all my readers who always stop by. You guys mean the world to me!  Just be wary about these companies that approach you. So much bullshit out there.

Coming up this week on Bee Beauty:

In case you missed it:

All About Color Correcting + Demo The Draping Technique. How to Contour with Color.