Aww, Yiss!  I have a review of the Anastasia Beverly Hills Moonchild Glow Kit.
It’s Monday, where’s the Weekly Edit?  It’ll be back next Monday and we will be back to our regularly scheduled programming. My sleep schedule is still crazy. Lots of stuff going on behind the scenes this week, and I needed a breather. I’ll fill ya in later on that but I went on a little tear in my Weekly Edit post last week and some things are being put into action. It’s a whole thing. But that’s not why you’re here, it’s time to review some awesome makeup and there will be a new tutorial Wednesday using this guy and a review Friday.

This is not your ordinary glow kit. This palette was a game changer since it’s release. Now it’s not just about a glow, it’s about a unicorn, duo-chromatic shine for the celestial gods.

What made me get this palette was the name, to be honest. I will buy anything that says Moon Child on it as it’s the of one of my favorite songs by Fields of the Nephilim and a favorite novel by Alister Crowley. Then I got my hands on this guy and fell in LOVE!

The Moon Child Glow Kit is stunning. It’s packaged similarly to the other Glow Kits in the material. It’s that heavy cardboard most palettes are packaged in. This one is a pretty silvery pale blue holographic finish and the font is foiled in pure halo goodness. HALO! In the Moon Child Glow Kit you a variety of six shade in square pans rather than 4 round pans like the older Glow Kits, the last two Glow Kit

In the Moon Child Glow Kit you a variety of six shade in square pans rather than 4 round pans like the older Glow Kits, the last two Glow Kit launches have included 6 round pans as well, I’m not sure why they went with square pans in this one palette.

The formula on the highlighters is smooth, pigmented and oh so shiny. There is a mix of finishes and textures.

Let’s check out the colors and finishes you get in this little beauty.

Blue Ice is described as a diamond white with an icy blue reflect by ABH. It’s a sheer white with a strong blue shift which is visible when the light hits it. The finish is smooth with very fine silver micro glitter.

Pink Heart is described as a pearl white with a pink opal reflect This one is less sheer than Blue Ice and has a strong pink shift. Again the texture is soft, smooth and has the same silver micro glitter. This is probably the most wearable shade in the kit.

Nyx’s Duo Chromatic Illuminating Powder in Snow Rose is a perfect dupe minus the micro glitter and Opal from the Kat Von D Alchemist Palette is a match.

Lucky Clover is one of my favorite shades. Definitely a more unique shade. ABH says it’s  a shamrock-infused gold with canary yellow diamond reflect, to me it’s a very pale almost white shade with a green and pale gold shift. A surprisingly beautiful and wearable shade. The texture is buttery soft with no micro glitter. Pure Duo-chrome goodness. 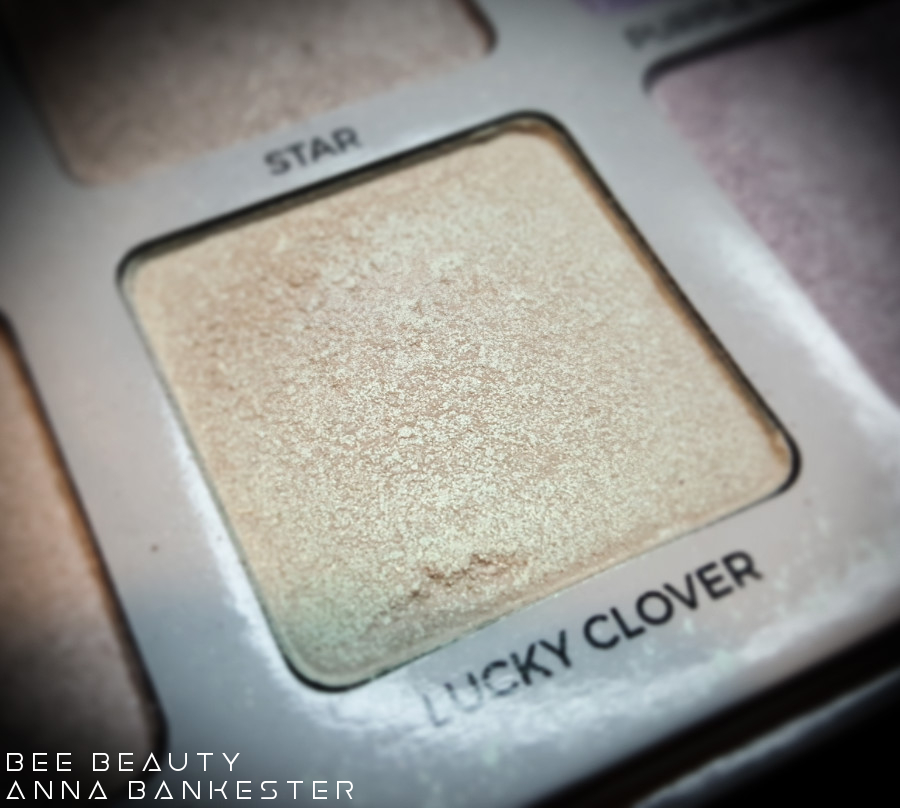 Purple Horses has a sheer lavender base with a very strong cool toned purple/blue shift and micro glitter. It’s described as A glittering lavender with an arctic blue reflect.

Amethyst from the Kat Von D Alchemist Palette is similar but more pigmented and no glitter.

Blue Moon is described as frozen blue with a silver reflect by ABH. This one I think of as a very cool based silver shade. When put next to Star is appears blue in tone because Star is a green based color (though it doesn’t read green like Lucky Clover) This is a pure cool-toned white shimmer.

Overall, this is an awesome avant-garde highlighting palette. If you have been looking for a cool toned highlight and love duo-chromatic shades. This is the one for you. It combines a glowy metallic highlight with the duo-chromatic or “holographic” trend. Whereas the Alchemist Palette is pure duo chrome, no glitter or metallic finish. I love it and so happy I got my hands on it.

The ABH Moon Child Palette is available on the official ABH website for $40 and it’s cruelty-free.