Happy Saturday you guys! I know I usually post tutorials on Friday but since it’s the holidays I decided to just take the day off and be lazy AF. Anyway, for today’s look, I wanted to use the teal green and brown duo chrome shade called Vestment from the Saints & Sinners Palette in a look paired with orange and red shadows because the contrast of the two shades is really cool. I used eyeshadows from the Kat Von D Saints & Sinners Palette and the Serpentina Palette. I paired the eyeshadow with a winged liner and neutral brown lip from Urban Decay.

If you wanna see how I got this look, just keep reading below.

The star of the show is the Kat Von D Saints & Sinners Palette, particularly the shade Vestment which is a shimmery maroon with a blue-green shift.

I started this look out as I always do with a primed eye and brows done. I laid down a base of Amen which is just a matte cream shade them moved on to the crease and transition.

For the transition area, I went with Devil which is a vibrant matte orange shade. I placed this shade pretty high into the transition and crease area with a really large fluffy eyeshadow brush. I bought Devil all the way to the inner brown and out toward the tail of the brow.

Next up I jumped over into the Serpentina Palette because of the amazing red shade called Bloodmilk.

Bloodmilk is one of my favorite eyeshadows of life. It’s a matte blood red.

With Bloodmilk on a smaller blending brush, I went into the crease and blended it into Devil in the transition area. To add depth, I brought in a deeper matte brown from the Saints & Sinners called Crucifix.

I placed Crucifix on the outer portion of the lid and blended it inward on the lid and into the crease and into Bloodmilk.

Now for the star eyeshadow. Vestment.

I applied Vestment all over the lid with a damp flat shader brush. and slightly blended it into the crease. I added a little more of the orange shade around the outsides to halo the look.

Then I did a standard winged liner with E.L.F. Gel Liner.

For the lower lashline, I went in with Nyx Faux Black in Oxblood in the water line and lower lash line connecting to the wing on the outer corner. 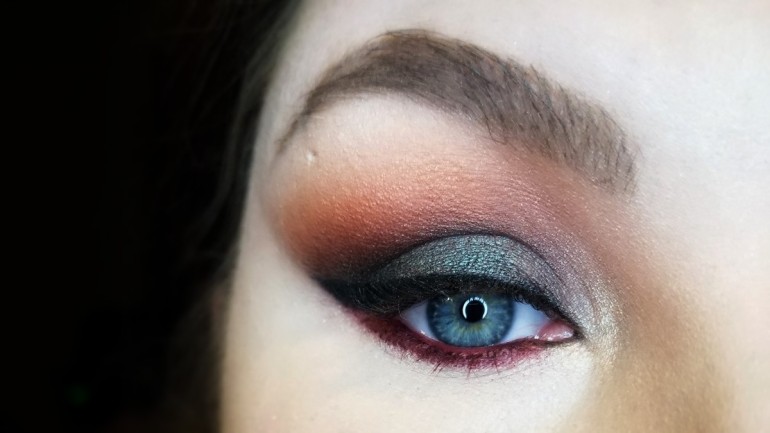 I blended out the liner with Bloodmilk and below that Devil to create an orange haze and really smoke out the lower lash line and then used the same highlighter I used on my cheeks in the inner corner which is just a champagne shade.  I had tried using a gold before with this look but it clashed too much. 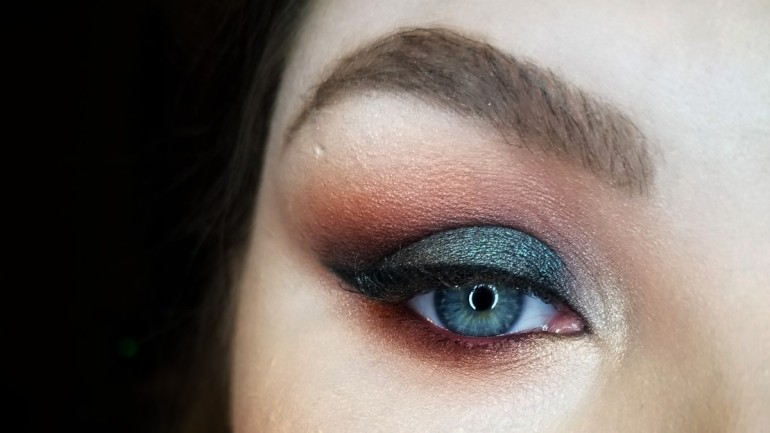 I added a few coats of L’oreal Lash Paradise and WetnWild Renegade Mascara and done! This was a pretty straight forward look. Just a lot of blending and back and forth reinforcing colors. Blush: Too Faced Love Flush Blush ” I Will Always Love You”

Short and sweet today. I hope everyone who celebrates had a good Thanksgiving. I cooked a ham that evening but we had to go on an adventure to find something open for lunch.  We were just looking to grab something quick but ended up having to eat at a buffet because that was all that was open. So there I was in Golden Coral with no bra, leggings, and an old ass Cradle of Filth shirt with unbrushed hair and no makeup stuffing my face. It was a hella cheat day, eat all the carbs. LOL!

Anywho, I’ll see you guys Monday with a Weekly Edit cause girl, it’s been a while. Have a good weekend!