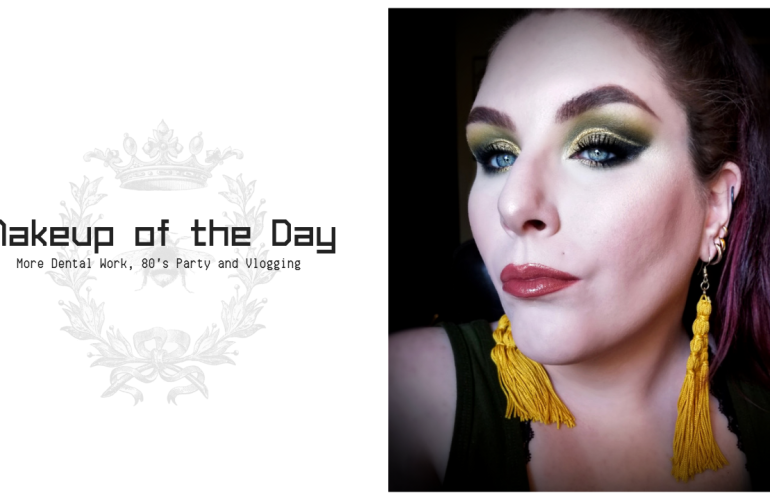 Hey hey guys! Girl, it has been a month. Most of April was a flop. As I have most of ya’ll know if you read my blog or follow my social media which now includes a YouTube channel. *hint hint* You will know that I have been in dentistry hell. Thus, I had to take about 2 weeks off of life in general. I will have a post and video detailing everything but it’s been pretty damn bad. The end for this year is in sight. Should be all done with everything on May 8th. I have a bite mold tomorrow morning and a root canal Wednesday then another the following week. I will being having 4 in total! Two which were unplanned, they just had bad timing and decided to join in on the the fun and hurt so bad I nearly fainted.

However before the pain really kicked off, I did get to have a little fun. There was a quiet evening out for dinner and drinks downtown, an 80’s party, getting to spend some time with my in-laws and dinner and a movie with friends. All of which is in the Vlog.

I haven’t had many opportunities to do makeup until last Wednesday after the 2nd root canal but I did the look pictured above for a upcoming tutorial here which will go up next week before the pain kicked off to bad.

To celebrate being almost pain free for a while though, I had to go full on glam and do something super dramatic.

For this look, I used the Boss Mood Palette from Morphe.

On the lips is a Covergirl Outlast lippie topped with Colourpop Ultra Glossy Lip in Charming.

But yeah, I have been just spending a lot of time at home enjoying the good and bad weather now that I am feeling better. I have also been practicing my vlogging skills so next weeks should me much improved from the current one which you can watch here:

Not only have I been working on my vlogging skills, I may have filmed a makeup tutorial for next week! Here’s a little sample:

I may not have a tutorial live on my youtube channel yet but ya girl got bloopers. Anna Bankester did an oppsie. A palette was harmed in making of this film. @hudabeauty pic.twitter.com/fqmLoF8ZSy

I had some goofs and some mishaps so I had to just laugh at it. The actual tutorial, I think came out pretty damn good for a first try and is a whooping 38 minutes long… My editing isn’t quite up to par yet so I spent the last couple of days really focusing on that and learning. I am really excited to share it. I’m gonna be a real booty guru! LOL. But really, I am not abandoning my blog by any means, this and YouTube will be companions to one another. Feedback on ways I can improve are of course welcome!

That is really all that has been going on, the vlog has some fun stuff in there from the 80’s night and some ramblings from me. Other than that, things have been pretty quiet. There is some fun stuff coming up next week though, I have a few things to post here and possible to Youtube is time allows and we are going on a real vacation! A bunch of use are heading over to Dallas for the weekend. The room is booked and am I so excited to go to the spa.

During all this downtime I have had, Miss Pumpkin has been my constant companion, Nurse Pumpkin.

I don’t want to sound whiny but I had some really bad days last week. The pain was unbearable. I have never felt such pain in my life in fact and ya girl been thought some shit in her day. This was on a new level. I fainted, a rage cried a couple of times. I cried out of exhaustion and pain. Screamed a time or two. I want to cry just thinking about how I felt. It wasn’t JUST the pain alone. It got in my head, I was so depressed that I just slept constantly and ate soft mushy junk food when I was awake. I couldn’t even focus to play Sims 4 or watch videos. I just laid in the dark with YouTube playing and slept as much as I could. I didn’t take into account how getting dental restoration would mess with my head. I knew there would be pain, most my pain wasn’t from the restoration itself but from two infections and a couple of really angry teeth. It all snow balled though. My mouth hurts, it looks fucking weird, I feel kind of gross to be honest and to top it off, this is costing thousands more that it was supposed too. I’m glad to be feeling almost better, and have been able to find something get excited over again which is making videos. It was time for a new challenge

I woke up last Thursday excited for life again which I haven’t felt much of this past month.

But yeah, Pumpkin stayed in bed with me all that time.

Anyway, that’s all for today. I just wanted to do a quick MOTD post and update ya’ll on what’s up.

Now that I am back to being my normal self for the most part be sure to check out my Instagram, I have been having a blast with IG Stories. Chatting it up and twitter too. I will see ya’ll Wednesday for a new Get the Look and a review on Friday!